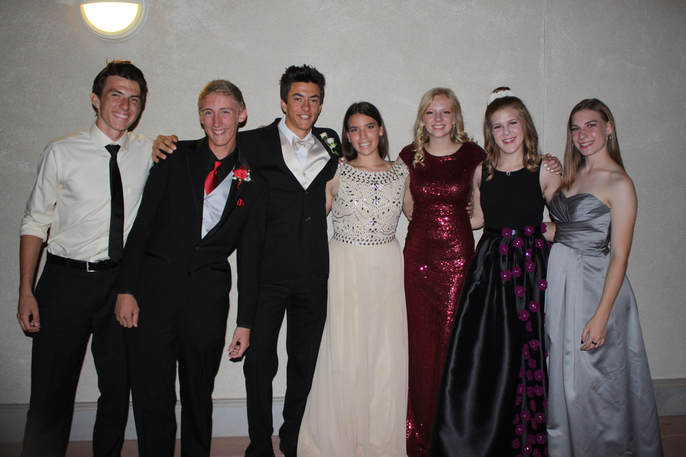 Chores
Students will be assigned specific daily responsibilities for the cleaning and upkeep of the school. These assignments will take effect during the school day and should last only a few minutes. Students will not be involved in cleaning jobs involving solvents and/or chemical cleaners. This small but important part of life at Madison Prep will not only keep the campus clean, but will serve to promote teamwork, responsibility, and school pride. Students will gain a sense of ownership in the school and will be less likely to litter or otherwise deface the campus.
Houses
Students at Madison Prep are placed into “houses,” which are also called “homerooms” or “advisor groups.”  The high school has ten houses, and the junior high has four.  Each house holds approximately 17 students, and one faculty member is assigned to every house.  The faculty advisor serves as the contact person between the school and the parents.  The advisors work with the students in their group to help guide them through their academic career and their practical college preparation. The houses are designed to be the small family units that make up the whole school community.  All houses compete with each other for house points throughout the school year to earn the honor of being Top House.  House points are earned in a wide variety of ways, and a scoreboard that shows the current standings is kept up in the front office.

Dress Code
Schools with an enforced dress code tend to be places that are more serious about learning, with students more focused on their schoolwork. The tone at these schools is more businesslike than at schools where students wear whatever they want. This atmosphere promotes better discipline and attendance, which lead to higher achievement. The Madison Prep Dress Code is designed with modesty, simplicity, safety, efficiency, and comfort in mind. The Dress Code applies to students on campus before, during, and after school.
The whole issue of fashion competition among peers is immediately diffused when a school dress code is put in place. There will be no contests over who can wear the shirt with the rudest slogan on it. This sort of thing is distracting to students, and it takes needed attention away from the day's lessons. Slovenliness will simply not be accepted, because sloppy dress leads to sloppy work habits and sloppy thinking.

And to those who say that a uniform robs students of their individuality, we say that it challenges students to express themselves in other, more meaningful ways. See the handbook for the most recent dress code rules.
High School government
​America's system of government depends on citizen participation. Madison Prep's student government is no different, and it includes all three branches of government: executive, legislative, and judicial. The Judicial Branch of Madison Prep's unique Student Government includes the Supreme Court Justices, Clerk and Bailiffs, the Attorney General and staff, and a cadre of defense attorneys. The Supreme Court hears all misdemeanor cases, which come to the court as tickets written by teachers or upperclassmen. Any student with such a ticket is summoned for a preliminary hearing, at which hearing a plea (guilty or not guilty) is entered. If guilty, the judges determine the student's sentence. If not guilty, then a trial is scheduled, cases are built by the Attorney General and the defense attorney(s), and witnesses are deposed in preparation for the trial.
The nine justices on the Supreme Court are appointed by the Student Body President and confirmed by the Senate (senators are made up of 2 students from each high school house). Once confirmed, the justices elect their Chief Justice and are ready to begin hearing cases, a responsibility that they take seriously.
The Court conducts preliminary hearings and full trials as needed, and these reflect many aspects of the American judicial system, including the use of the rules of evidence, protection of the rights of the accused, and punishments that fit the crimes. Each student is required to participate in the Madison student government and is evaluated based on his/her involvement and effort. Students will receive a Satisfactory/Unsatisfactory grade each trimester.
Students will experience at least two of the three branches of the government during a four-year high school career, and they might, in some cases, change branches during a school year in order to enhance the experiential nature of this learning process.
We are devoting time and resources to actualizing student and faculty participation in each branch, with checks and balances on the limited powers defined for each. Real legislation will be drafted, real compromises will be reached in the passage of bills, and real decisions will be made regarding school functions, social activities, enrichment club activities, student fundraising, and other appropriate student issues in accordance with the School Constitution. The student government also will be responsible each trimester for choosing a community service project for the school population to carry out in the larger Phoenix area community.
As in the American system, the legislative branch will draft and pass legislation, the executive branch will sign or veto passed legislation and enforce signed legislation, and the judicial branch will adjudicate alleged breaches of campus rules. Naturally, school administration will deal with egregious student infractions, transcending the student government. In order to keep the government focused and moving ahead, the president will address the student body with a prepared speech at least once a year.

As in the American system, a free press is essential. In the Madison Prep system, a small number of students and one faculty member will stand outside the student government to report on its activities via The Federalist, the student newspaper.
JH Student Government
The James Madison Preparatory Junior High government was set up for two reasons. First, to train the junior high students in the way of the government system. This is a small way to prepare them for the experience of our student government here in the high school when they move on.  The second reason the council was created was to give the middle school students a way to plan activities for the junior high. Last year they council planned a movie outdoor movie night, a game night, sold t-shirts and hosted an alternative food day.
Assembly
Each school day includes a morning assembly between first and second periods at which all students and staff members take part in the Pledge of Allegiance, a moment of quiet reflection, announcements, and other presentations that promote learning and the Code of Conduct.  These presentations are often of a historical or motivational nature.  A different teacher runs the assembly each day.  Morning Assembly only takes about twenty minutes and is designed to build and promote school community cohesion.
​​